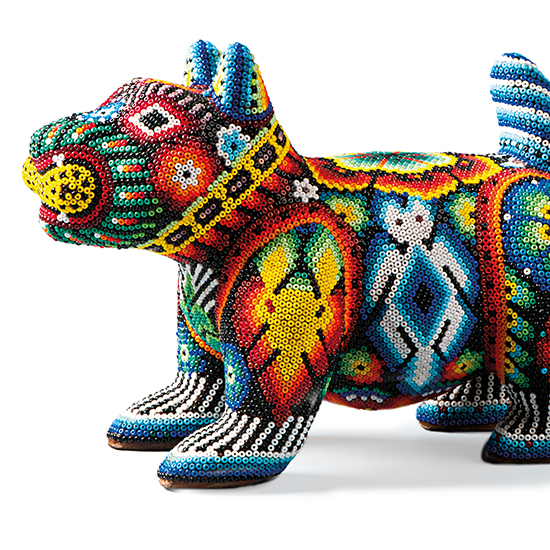 They resisted the Conquistadors. But not Czech seed beads.

Juan, a member of the Mexican Huichol tribe, dreamed of getting to know how the seed beads, which mean more than just a way of making a living for him and all other Huichol, come into the world. The Czech Rocailles has been indispensable for this traditional mountain tribe since it was first made at the turn of the 19th and 20th centuries. However, the products which the Huichol make from them are not merely a commercial matter. They are mainly artistic depictions of the Huichol view of the world. They depict the elements, sacred symbols and sacred animals and plants and portray ancient mythology and knowledge.

The Huichol still have close ties with nature, their ancestors and spirits. Their traditions and ancient wisdom have never been interrupted by incursions from outside and they have managed to keep them unsullied until the present, which makes them somewhat unique. They use their products in regular life and wear them during their traditional celebrations. 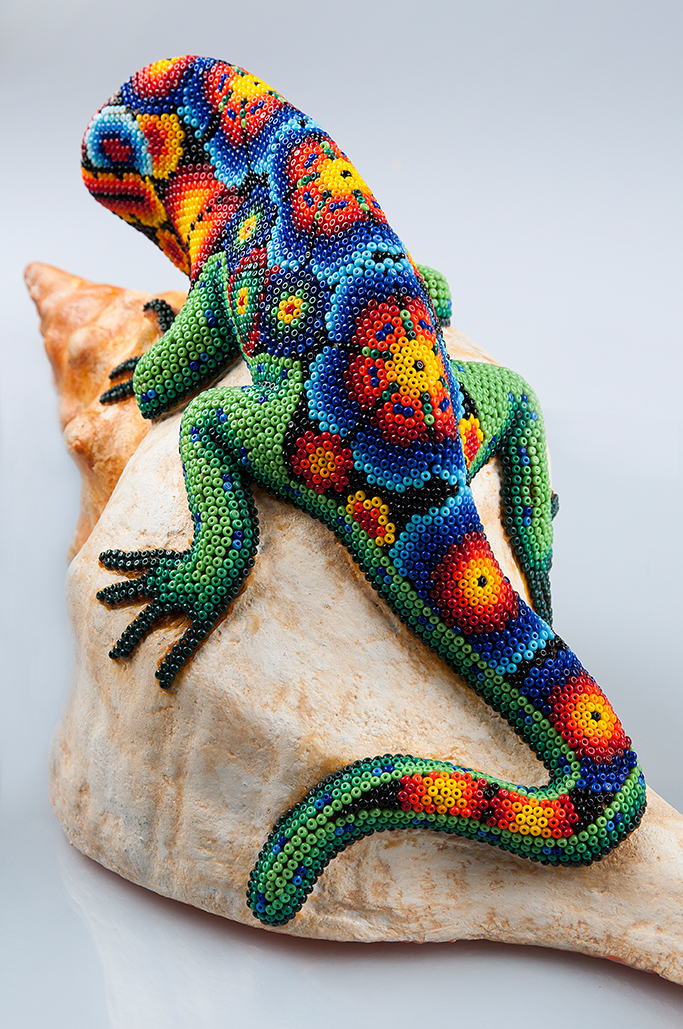 Juan's dream came true at the end of May. He, his father and his friend Santiago found themselves at Preciosa Ornela's Perlovka facility in Desná. Our colleague, Miroslav Macoun, the Head of Operations at the Perlovka facility, showed our honoured guests the rocailles production proces starting with the Desná furnaces and on to the glassworks, the cutting and sorting operations and the tumbling process etc. We could not pass up this opportunity and so we took a camera and a list of questions, so that we could present this interesting Indian tribe and its remarkable art, which relies implicitly on our seed beads, to our customers and fans of the beads and seed beads with the PRECIOSA Traditional Czech Beads brand.

Juan, who, unlike his father, speaks Spanish in addition to the original Huichol language, answered all our questions with willingness and pleasure.

Juan often travels to Europe, mainly to Germany, where he tells people about Huichol traditions and talks to them about the importance of protecting nature and the preservation of sacred sites. Don Pablo, as his father is called, took his first trip outside Mexico this year. They only spent one week in the Czech Republic, where they visited the Bohemian Paradise and the Šumava (Bohemian) Forest in addition to Desná.

The Huichol are a traditional nation which strongly preserves its traditions, faith, culture and language; but for all that the march of time must also leave its mark. What has changed?

The young ones. They are losing some of their interest in learning the old knowledge and becoming shamans. They prefer to study law or architecture.

As we are speaking about the youth of the Huichol tribe, from what age do they join in the production of artistic items? How old are the Huichol when they start making things?

Ten-year-olds are regularly involved in the process. The more talented are able to make a piece of jewelry out of rocailles at the age of eight. They play with seed beads from a young age and then they learn to work with them at school.

Does everybody in the tribe work with seed beads or is this activity dominated by women?

No, no, not at all. Everybody.

He then added that they have always been involved in this art alongside their agriculture. While their only modest income comes from the sale of artistic items, they gain their sustenance from primitive agriculture. The main cultivated crop is corn. They live high in the mountains, far from the cities.

Is it possible to say how old Huichol art is?

The beginnings of our history date back to around the year 1800 BC. At that time, seeds and clay were used, until our great-grandparents began purchasing Czech seed beads, which completely replaced the natural materials. That was a true "conquista" (a conquest, editor's note), forget about the Spanish! (He laughed and it was clear that he was proud of this.)

Santiago added that there is a film recording which documents the origins of the trade in Czech seed beads in 1890. At that time, Mexico was visited by the Norwegian researcher and traveller, Carl S. Lumholtz. He saw what the Huichol were making out of seeds and offered them glass seed beads from Bohemia. That is how the "chaquira", as the Hispanics call the rocailles, came to Mexico.

You express your culture, personal stories and traditions with your works of art. This is de facto a different form of written expression. What else do your products express? For example, these pieces of jewelry?

Juan played with a pile of bracelets and necklaces, which abounded in bright colors and natural patterns, throughout the interview.

Basically every item expresses something. Some tell the stories from the mythology of our tribe. For example, the dog is something like our mother.

Yes, Don Pablo wanted to be photographed with a calendar, where the current week was accompanied by a picture of a statue of a dog. It was a Huichol product, covered, of course, in brightly colored seed beads. Pablo did not want to leave without a reminder of this coincidence. 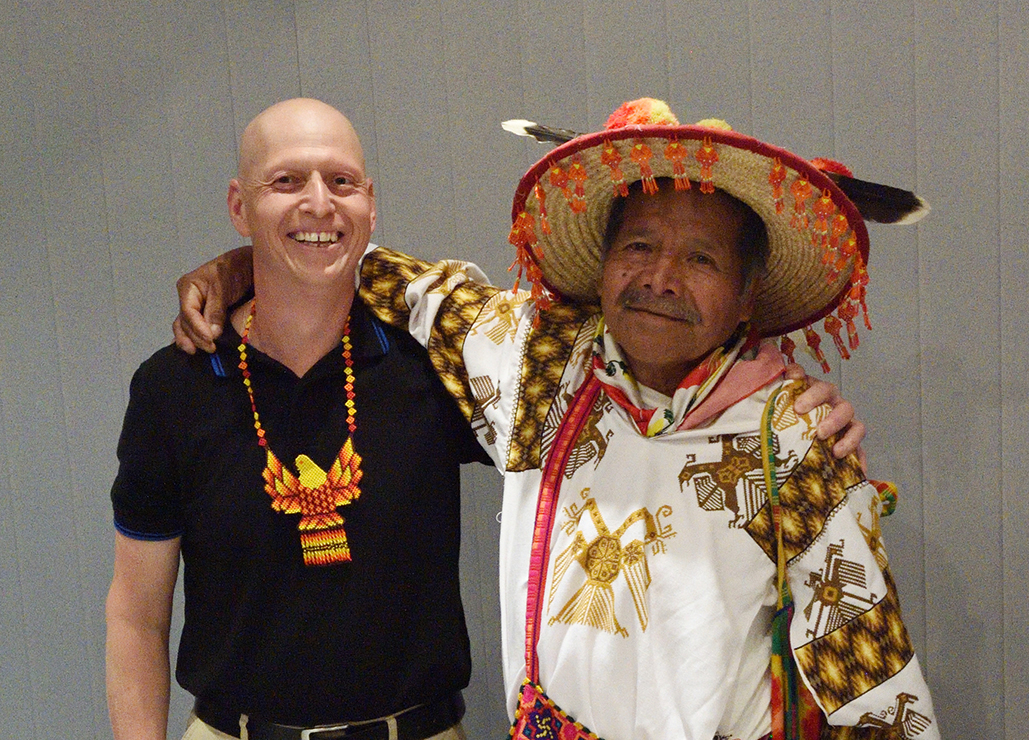 Juan showed me patterns on pieces of jewelry and on their clothes. We have an eagle in our "coat-of-arms". The eagle is our symbol. Our shamans wear eagle feathers in their hats, as you can see with my father, which they use to communicate with the gods during rituals and as such they are able to heal the sick and otherwise provide assistance. My father is a Marakame. This means a healer and a singer of the sacred songs.

Are there any pieces which are made purely for commercial purposes?

Not at all, everything means something, everything bears a story. Nothing is made merely for sale.

The Huichol spend a significant part of their lives making each single item. How long did it take, for example, to make this bracelet ?

That kind of bracelet takes about 3 days. And the dog statue from the calendar, which is about 25 cm, takes about two weeks.

Do you work exclusively with Czech seed beads or do you also use seed beads of different origins? Do you differentiate during work between which seed beads are Czech, which are Japanese or Chinese?

Czech. And mainly the 11/0 size, it is just right. Japanese seed beads easily become transparent and the Chinese seed beads are all different sizes. There is no other seed bead which will do. 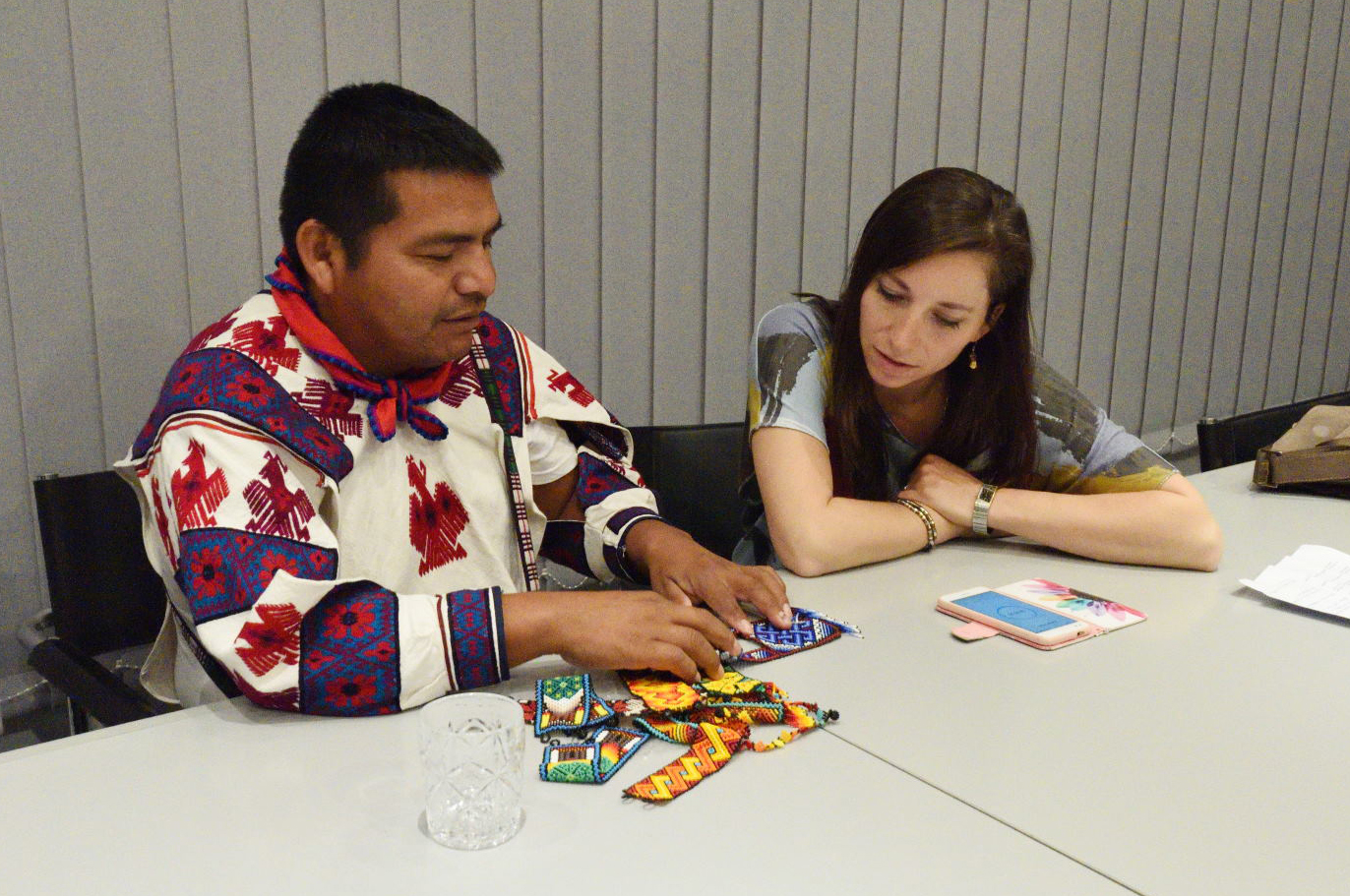 The color pallet is typical for your works of art. Do the colors have a symbolism, a meaning or a message ?

We use all colors, all "living". (Juan picked up a bracelet and pointed to the individual colors.) Green represents nature. Red and yellow symbolise fire, soil and the earth. Black represents darkness. Blue represents water or the sky.

One of the bracelets includes a green flower. Juan explains that this is a Peyote. A thornless cactus - a sacred flower which is associated with the beginning of their existence for the Huichol. They collect it using knives and literally gouge it out of the desert. And they do this in one specific area, San Luis Potosí, about 400 km from their home. Their ancestors regularly undertook this journey every two years. It took about two weeks. Nowadays, they use automobiles - they hitchhike. This shortens the journey to three days. But that is only the journey one way.

Peyote is a teacher for us. According to the mythology of our tribe, a blue stag brought our ancestors from the sea. It transformed into this plant at Potosí. Our ancestors began eating it and since that time we have used it in our rituals, where we learn everything we need - singing, prayer, healing - from Peyote while consuming it in the vicinity of fire. It allows us to see our lives - it is our "university". We also see, for example, when it is necessary to sow, what events are approaching and so on.

During your visit, you saw the production process ranging from melting the glass through to the final seed bead. What are your impressions of the tour? Did it come close to what you had imagined?

No, absolutely not. I had imagined something much smaller. It's amazing here. And the machines!

Huichol products are known worldwide. However, they try to sell them on their own behalf and to avoid middlemen who would otherwise "bleed them dry". They need to transfer the sense and story of every item they sell. Santiago also pointed to the fact that Huichol products can admittedly be found on global internet sales networks, but that this does not involve "fair trade". For this reason, they recommend purchasing directly from the Huichol.

The Huichol make a very modest living. Even purchasing the seed beads for their products is not easy. In order to purchase the rocailles for their work, they must first make a ca 700 km long journey to the nearest point of sale on foot, by hitchhiking and so on. Despite that, they still place seed bead after seed bead with humility and patience in order to create amazing original pieces of art. We can only hope that the seed beads will become more accessible to them in the mountains. Who knows - perhaps the difficulties of the Huichol will be reduced with the help of Preciosa Ornela. 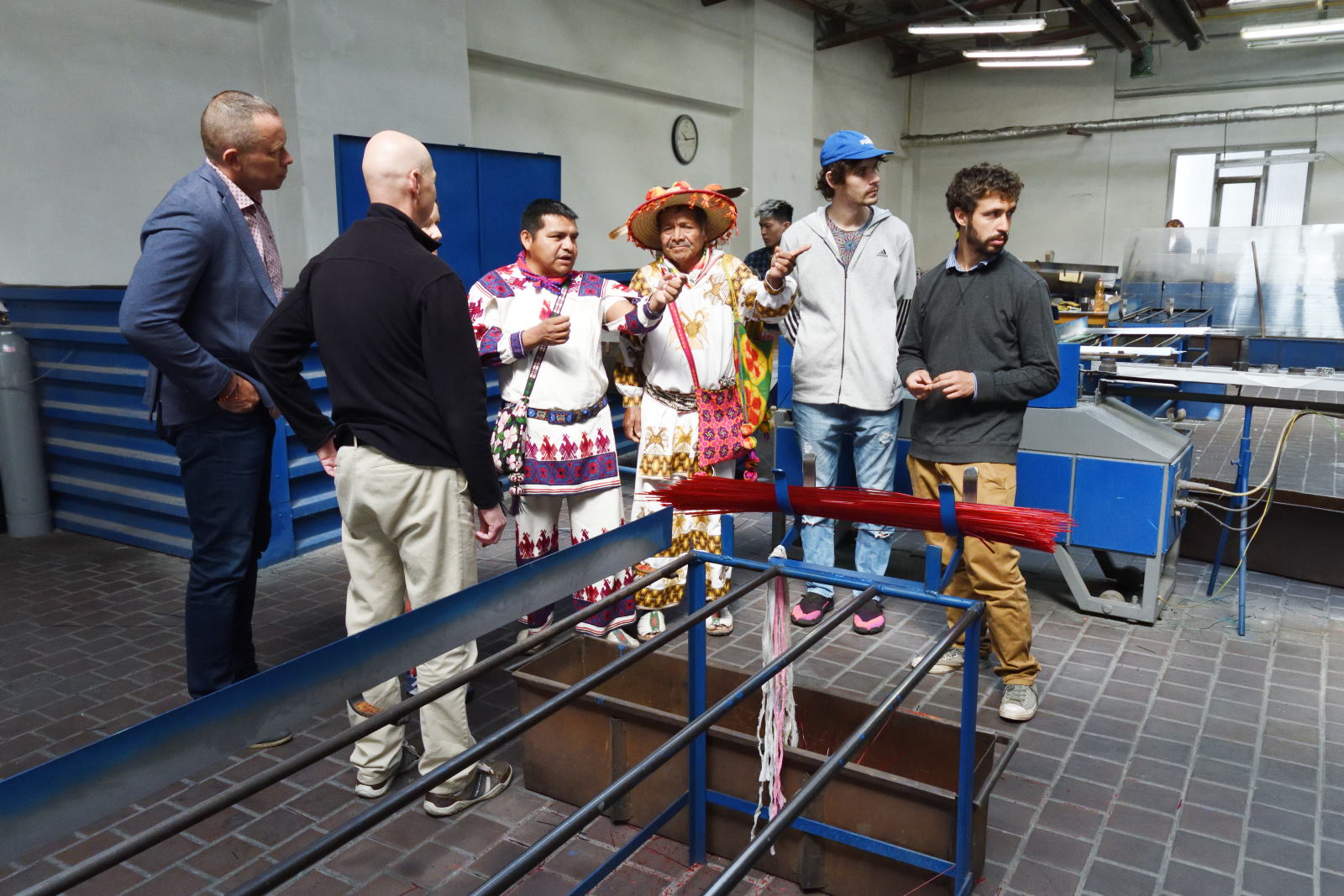 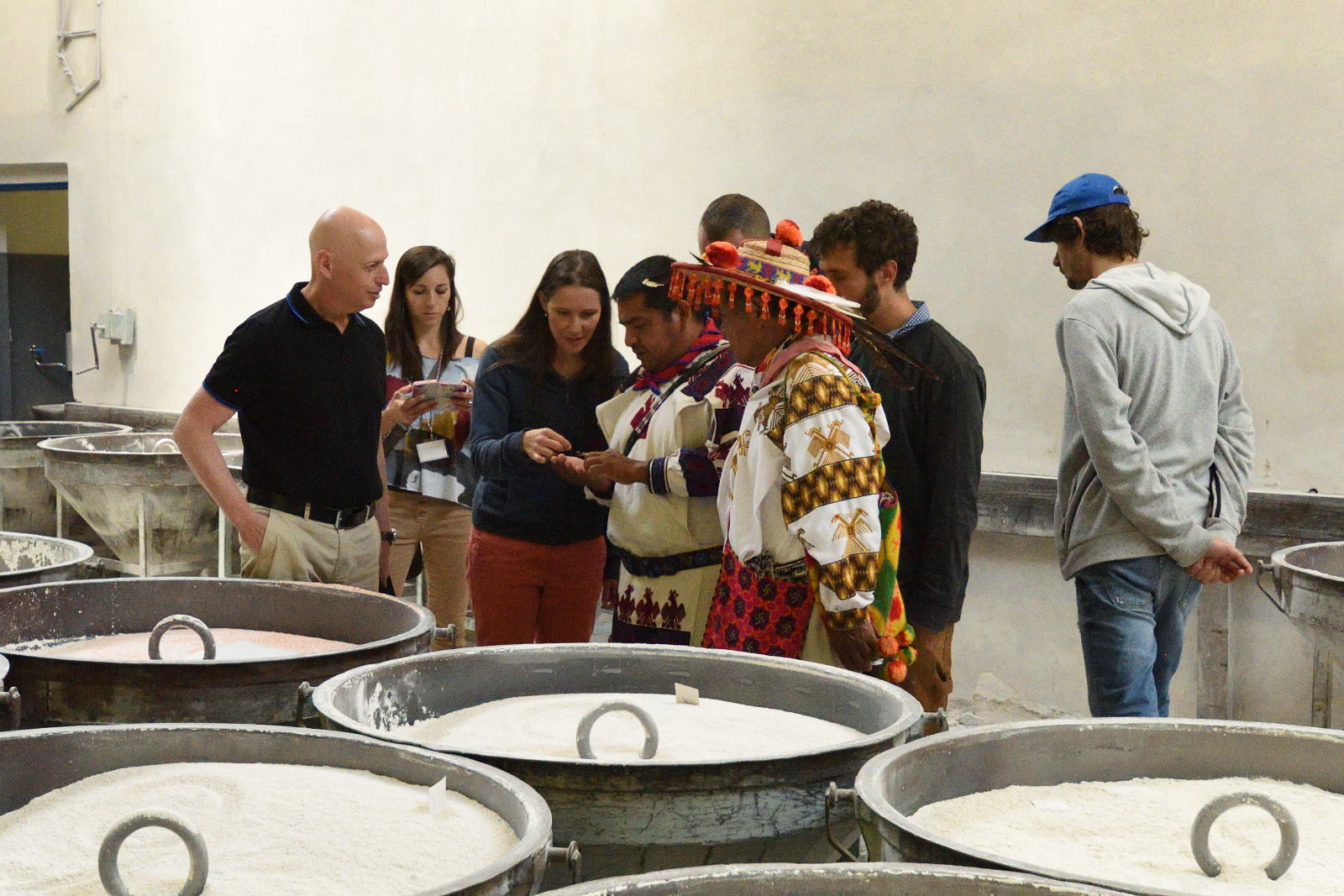 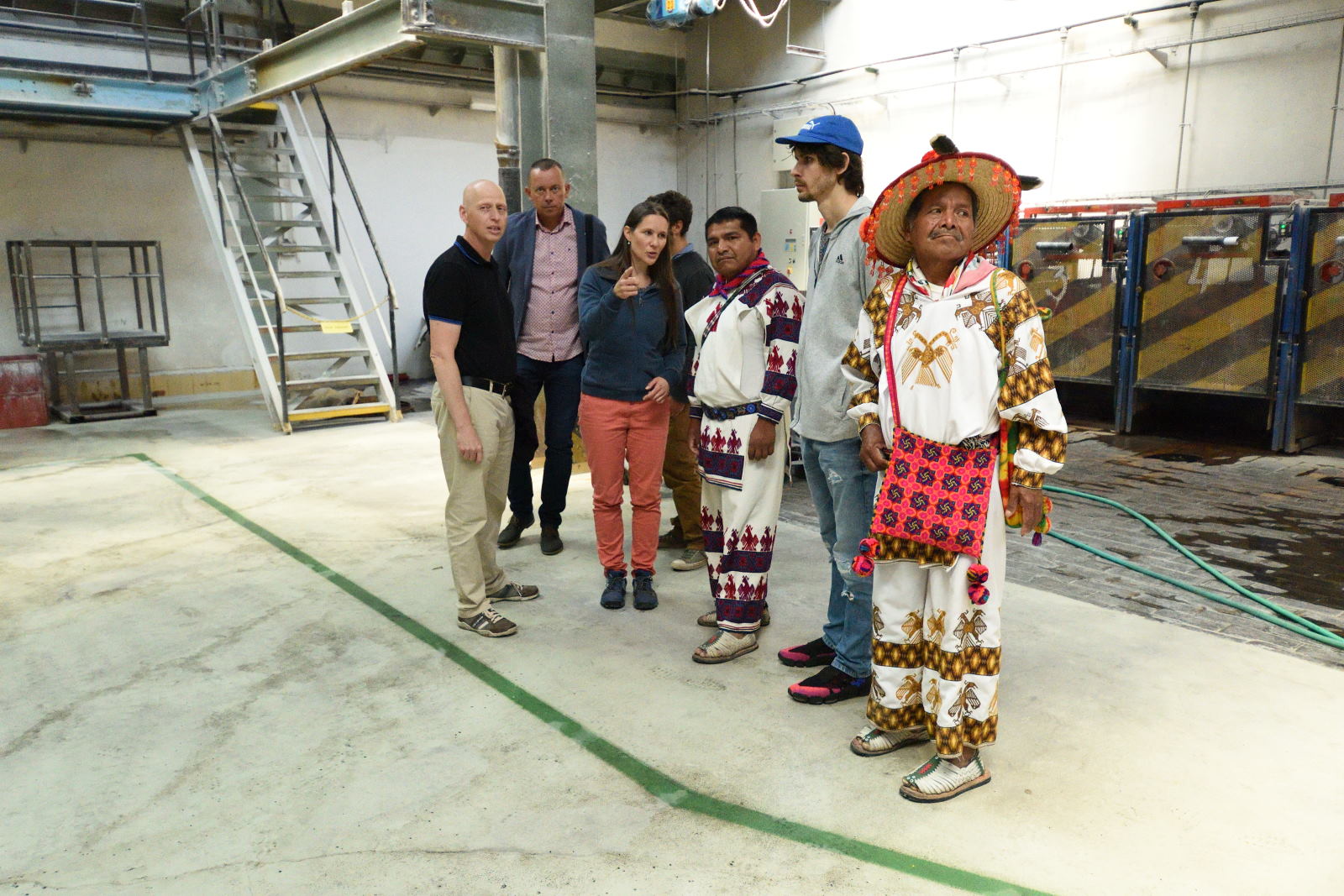 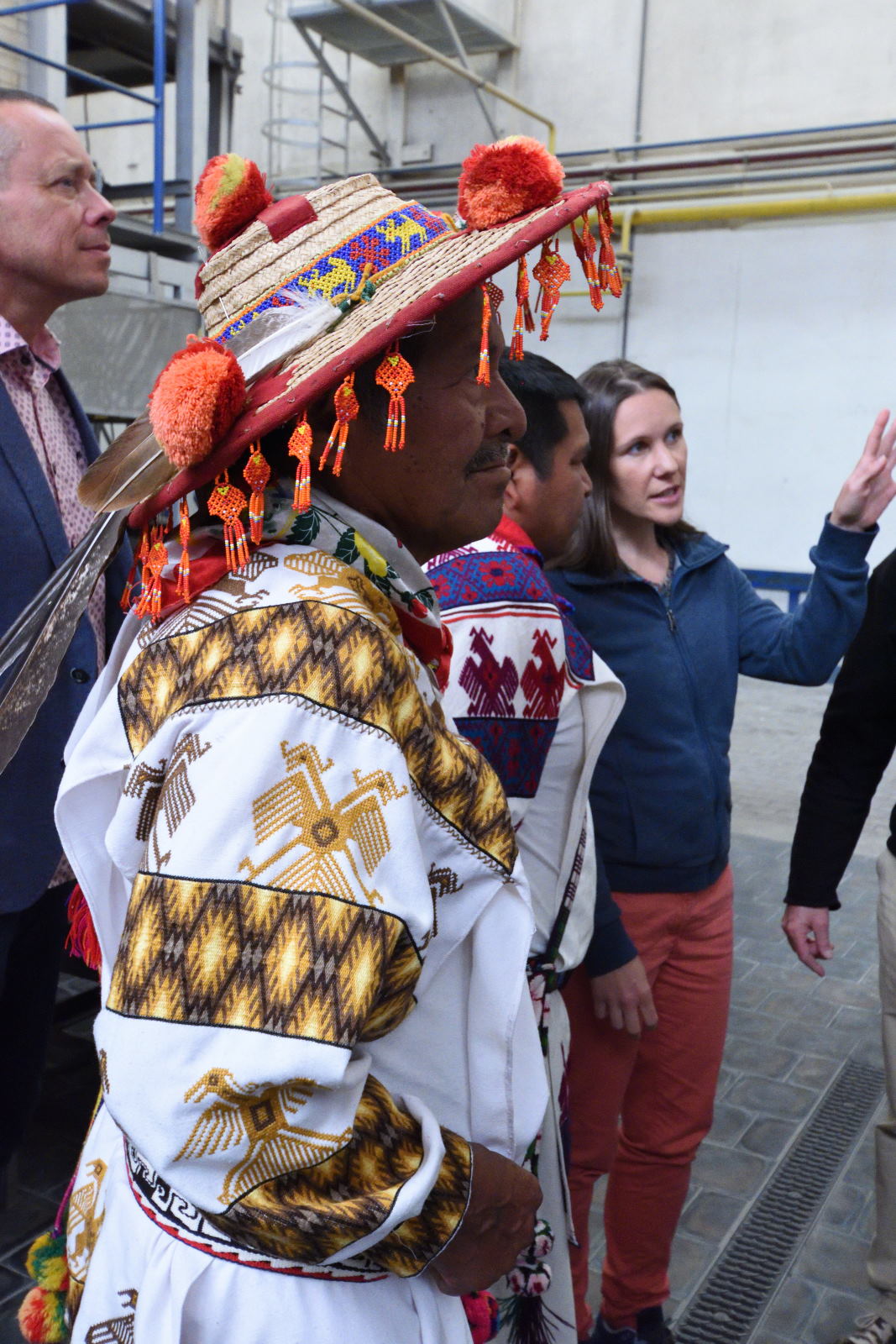 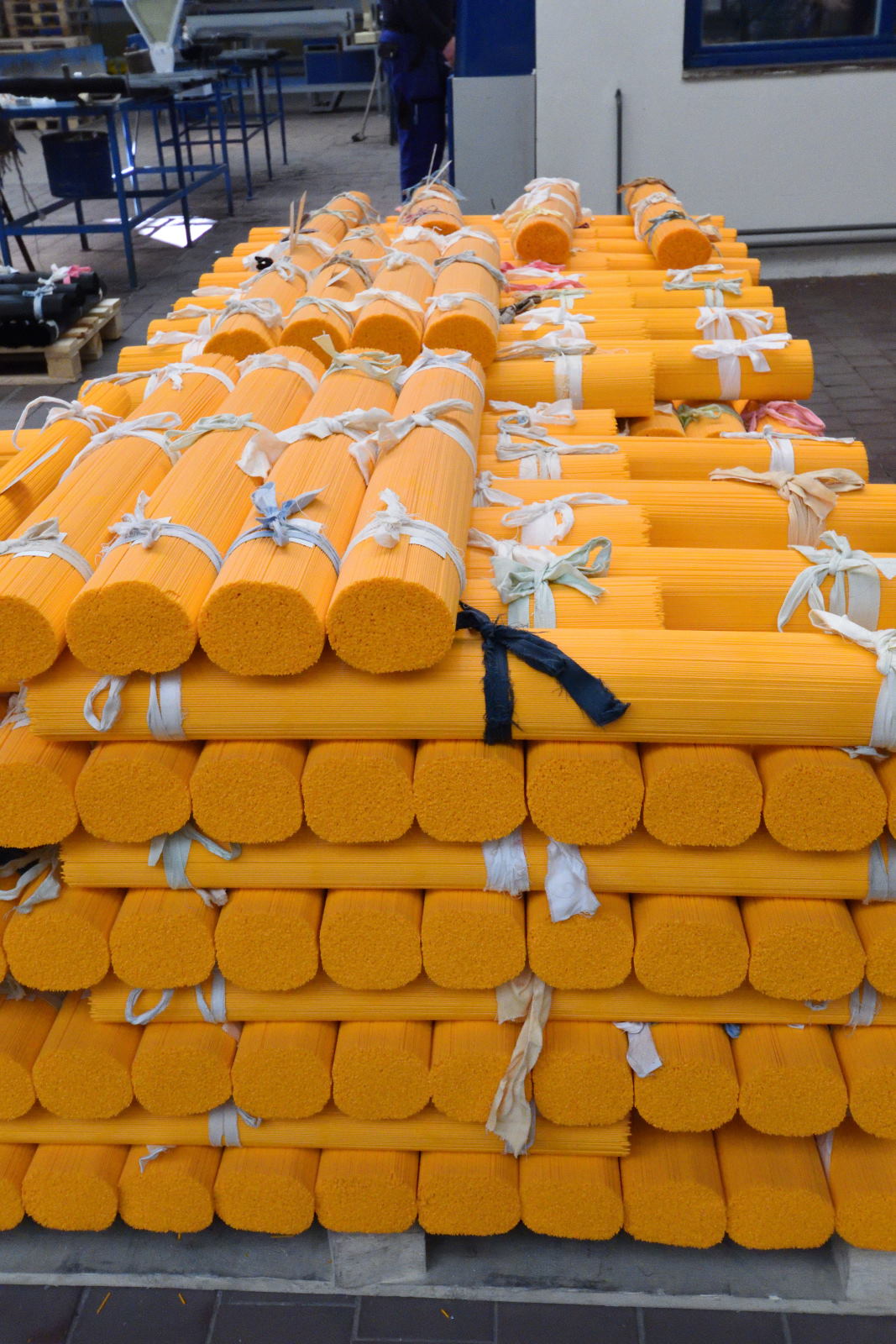 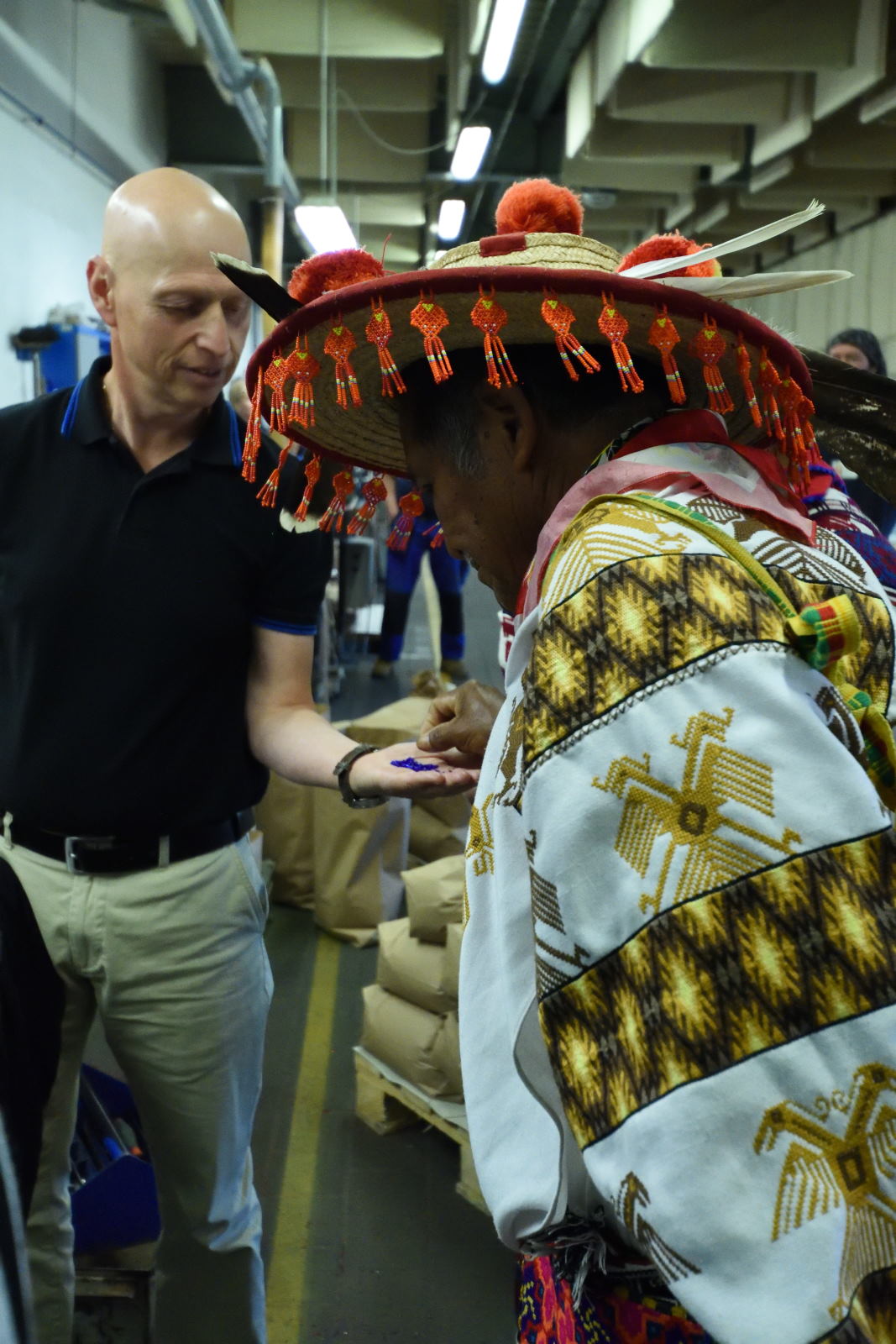 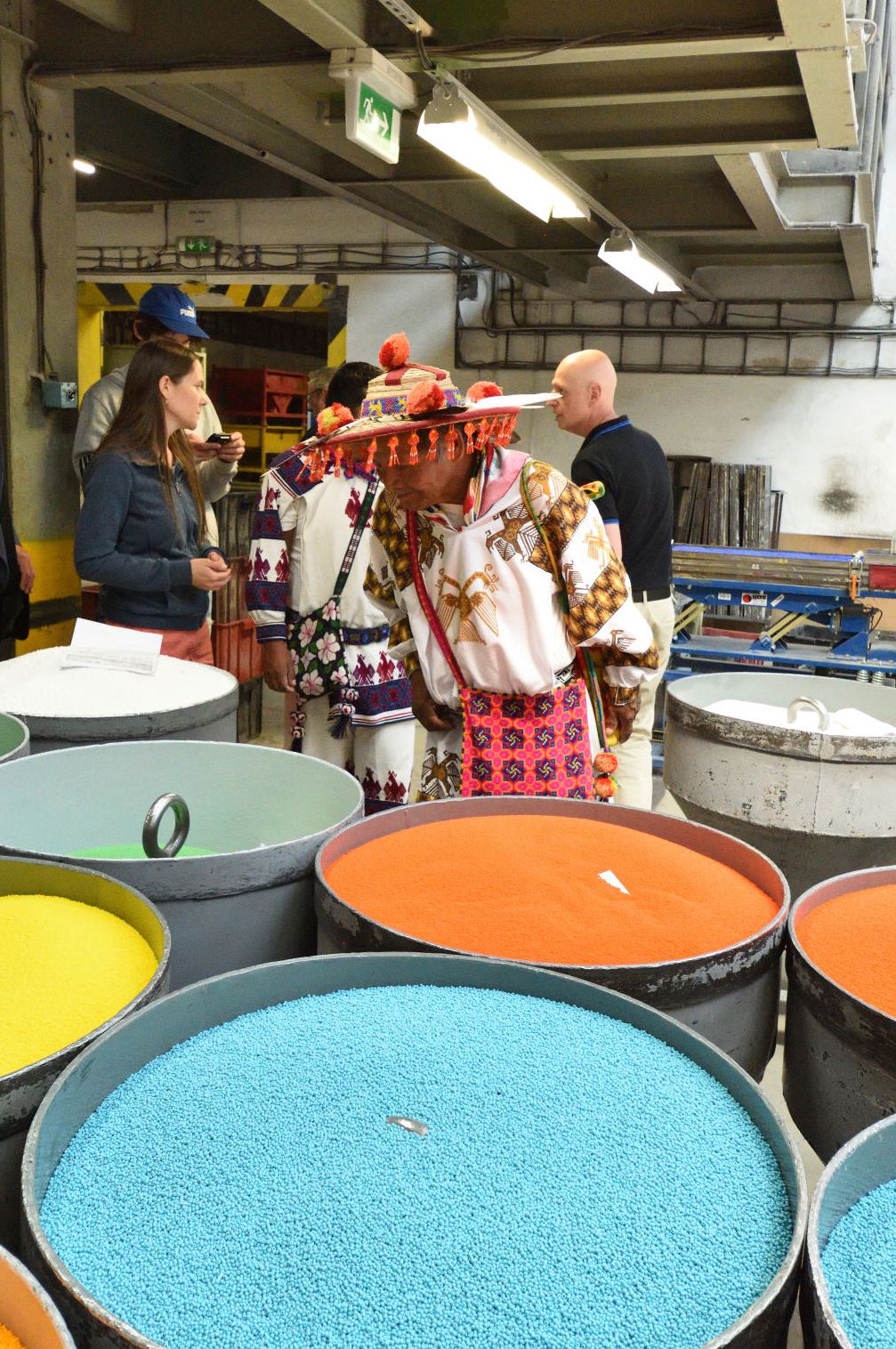 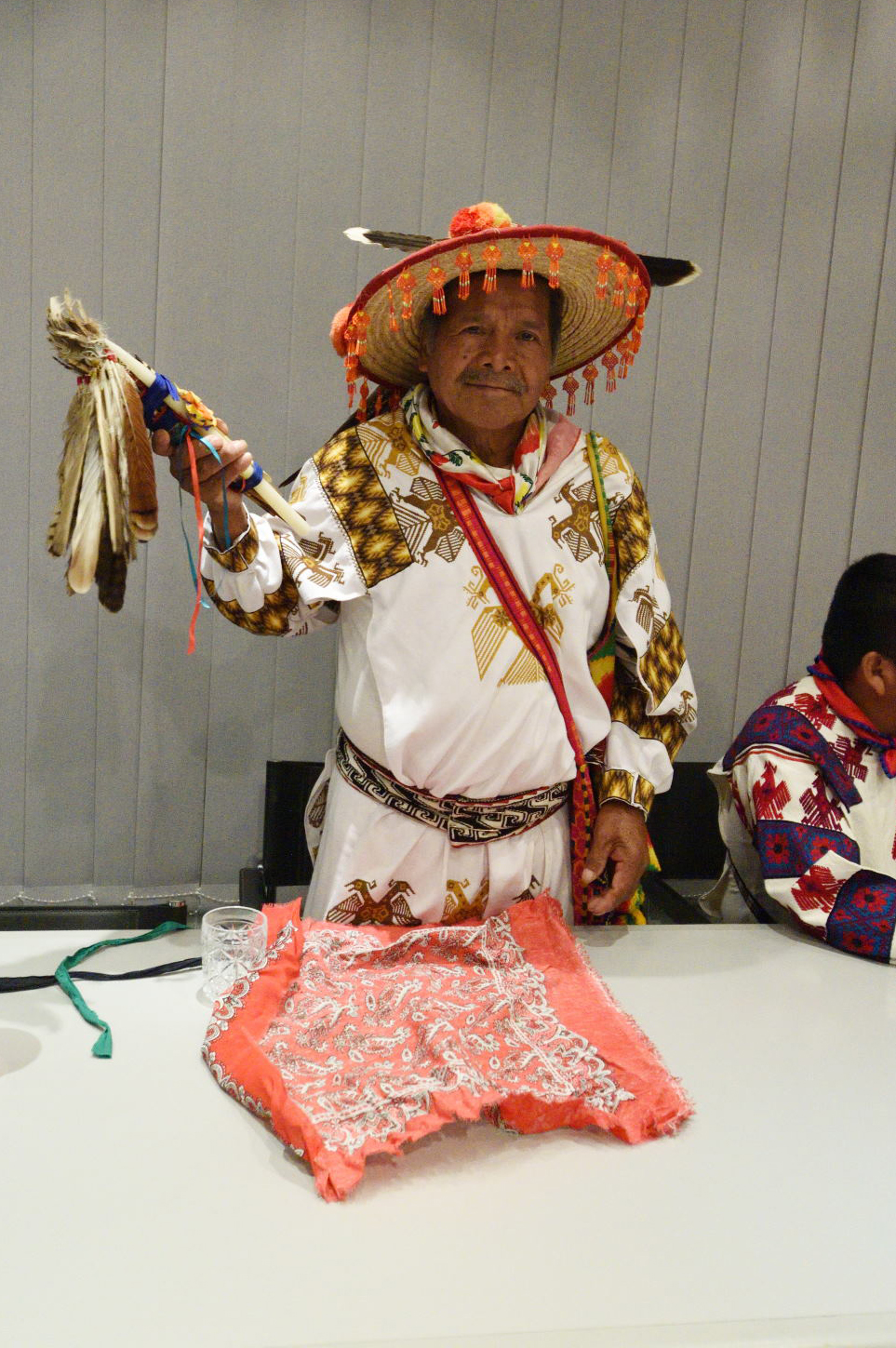 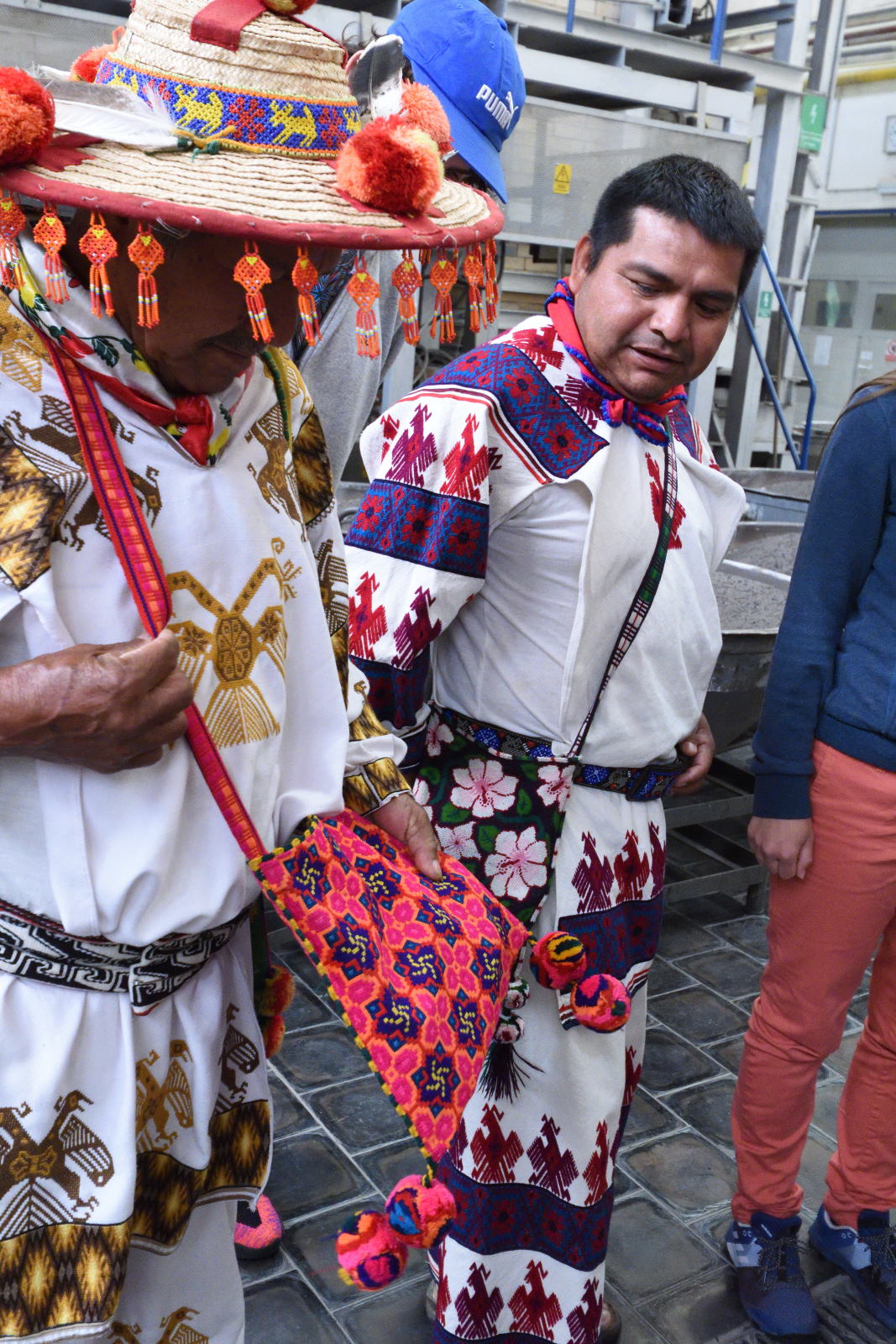