Necklace made from PRECIOSA Pip™ beads

With their metallic gleam and curves inspired by natural shapes, PRECIOSA Pip™ beads create interesting pieces of jewelry when combined with a twisted cord.

This tutorial will enable you to create an accessory with which you can stand out during a wide variety of occasions. The PRECIOSA Pip™ pressed beads have a small core with an axially symmetric flattened shape which enables the realisation of half metal coating on both sides of the bead with the resulting effect of an overall decoration. In this case, we have used the California decoration in the glossy finish. PRECIOSA Pip™ beads are made to create flat flowers. By combining them with other seed beads and rocailles, you can achieve an effective spatial shape. If you wish to supplement the necklace with other pieces of jewelry, you can create another two pairs of connected rings and hang them on earring hooks. The range offers ten California two-color vacuum decorations in glossy and matt finishes. It is entirely up to you which combination you choose!

PRECIOSA ORNELA wishes you much enjoyment and inspiration.

metal parts - metal crimp beads; the end of the cord (a cap or eye pin); the fastening (a carabiner, a counter-ring or an adjusting chain, ovals or rings)

a 0.20 mm nylon line; a thin needle; scissors; a 0.40 mm wire; snipping pliers; flat nose pliers (for flattening the beginning of the line, crimping the crimp bead and closing the rings) 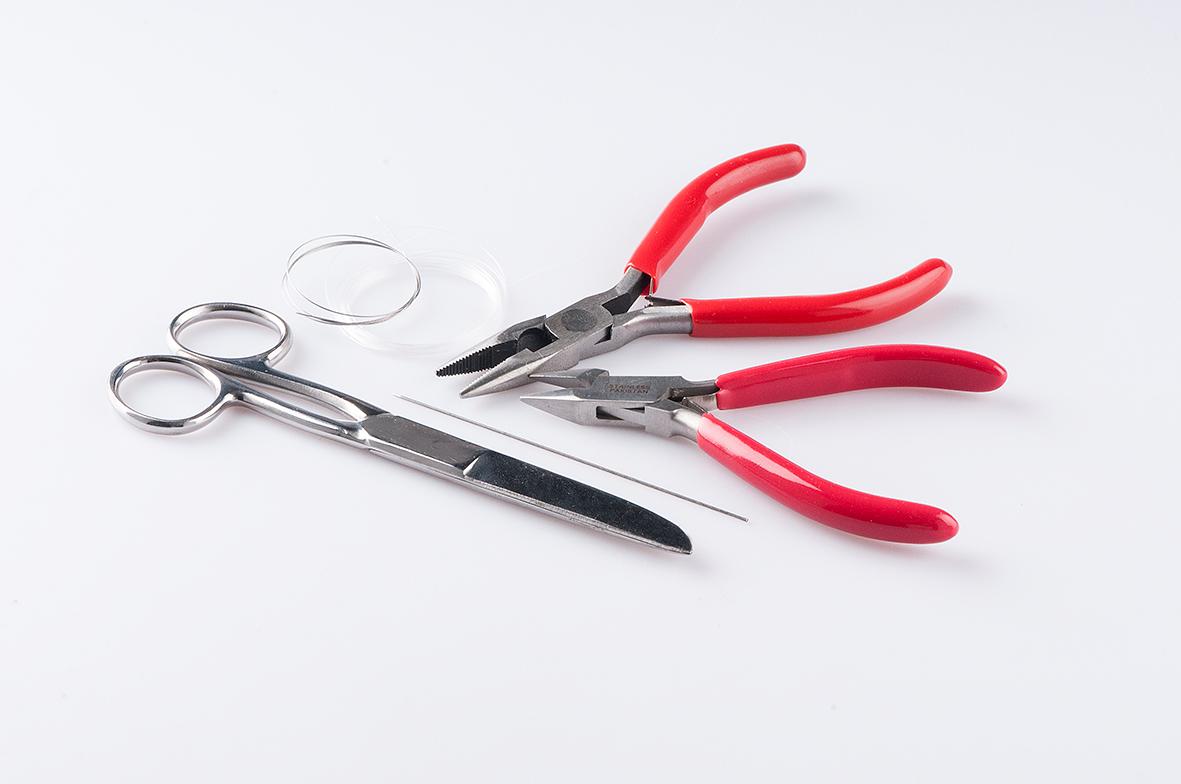 The central part of the necklace consists of 14 double-rowed rings. There is another larger ring in the middle between the rows.

String 2x R10. Thread the line through the first of the strung R10 once again. Use the "right angle weave" stitch. String 1x P. Repeat the R10 and P stringing a total of 6x. All of the P should be twisted in the same direction so that they are gold on one side and bronze on the other side. Connect them by passing the line through the rocailles.

Insert the needle into the top R10. Additionally string 1x P. Thread the line through the next top R10. Continue in this way around the entire circumference. All of the P should be turned in the same way as in the 1st row. Connect them to the rocailles. Tie off the ends of the lines and pull them into the surrounding beads.

String a row of 2x R10 and 1x P. Repeat this a total of 8x. Once again, pay attention to the direction that the P are turned. Thread the line through everything one more time. Before tying off the lines, pull the ring over one of the rows of the double-rowed circle. Pay attention to the direction in which the P are turned, just like in the double-rowed circle. Place the ring in the dimple and tighten. Pull the ends of the lines into the surrounding beads.

Thread the 14 sewn triple rings with 1x PB6 between them onto the wire.

One shade of the P is twisted to the right, the other is to the left.

The stringing ends at the sides with the PB6. Create loops. String 1x crimp bead, 1x R6, 1x crimp bead and 20x R10 on each side. Thread the line through the crimp beads, the R6, part of the triple-rowed circles and the PB6 again. Tighten and then crimp the crimp beads. Snip off the remainder of the wire. 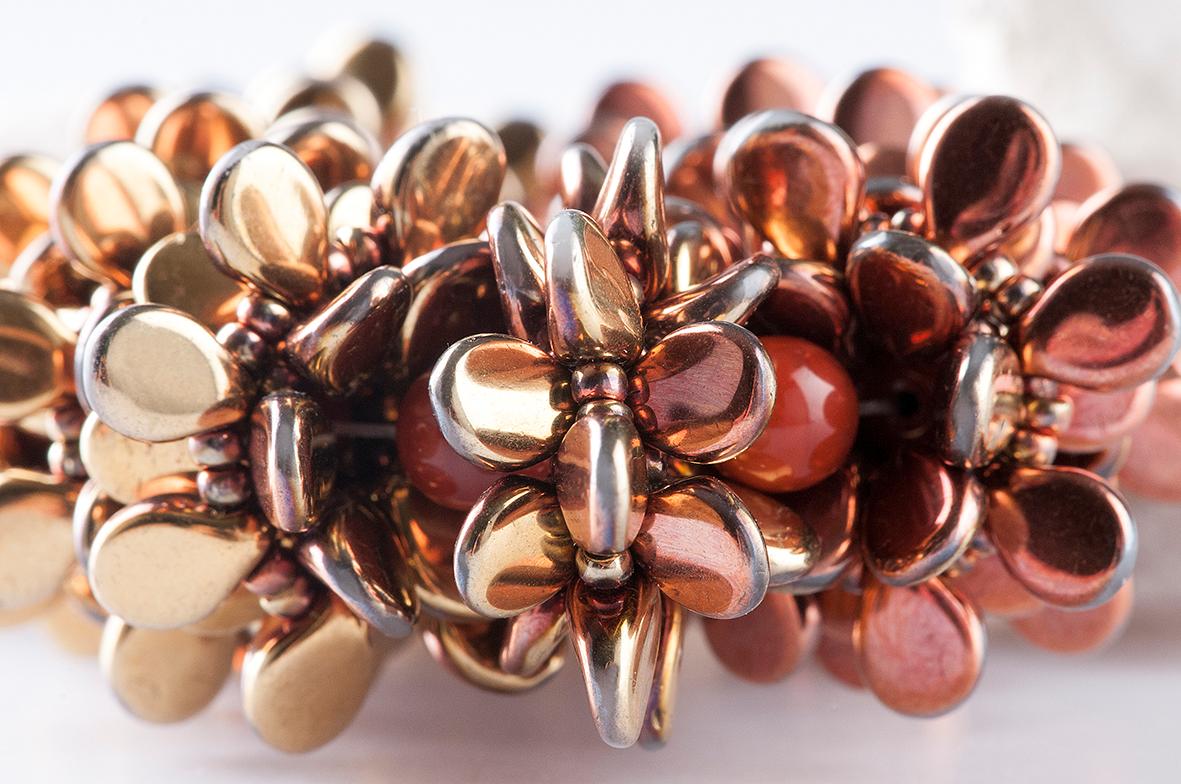 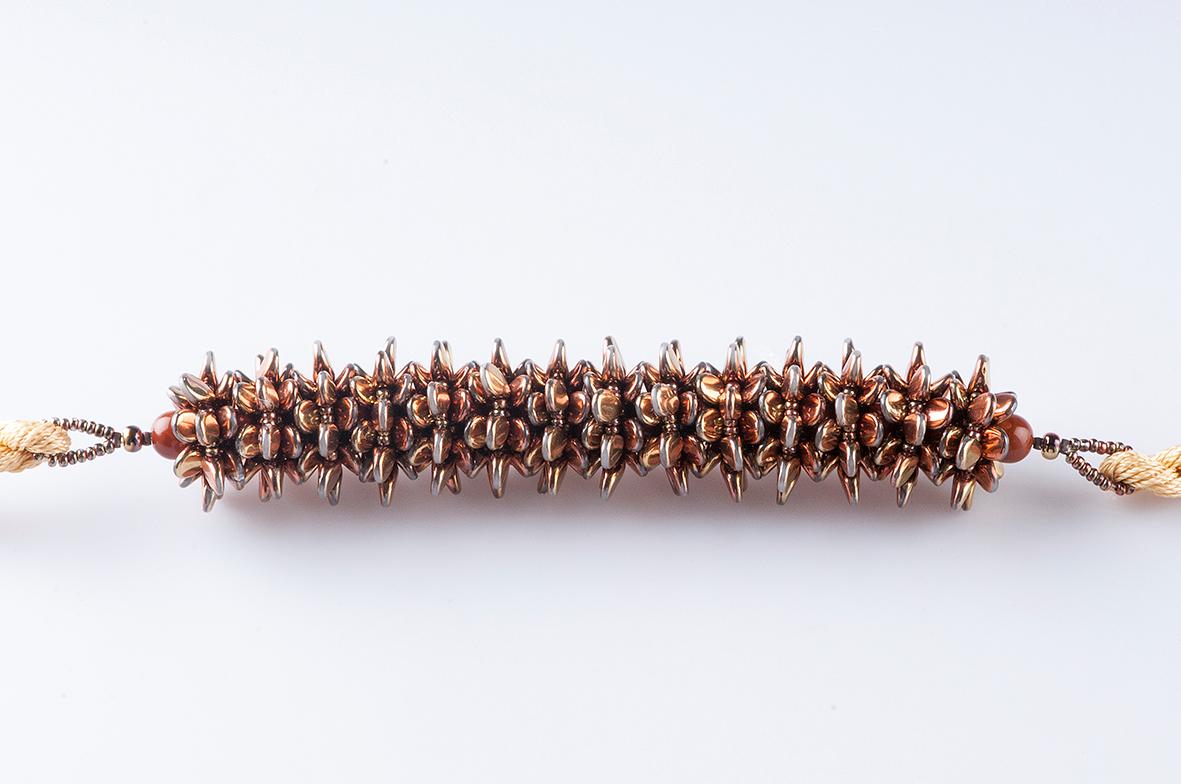 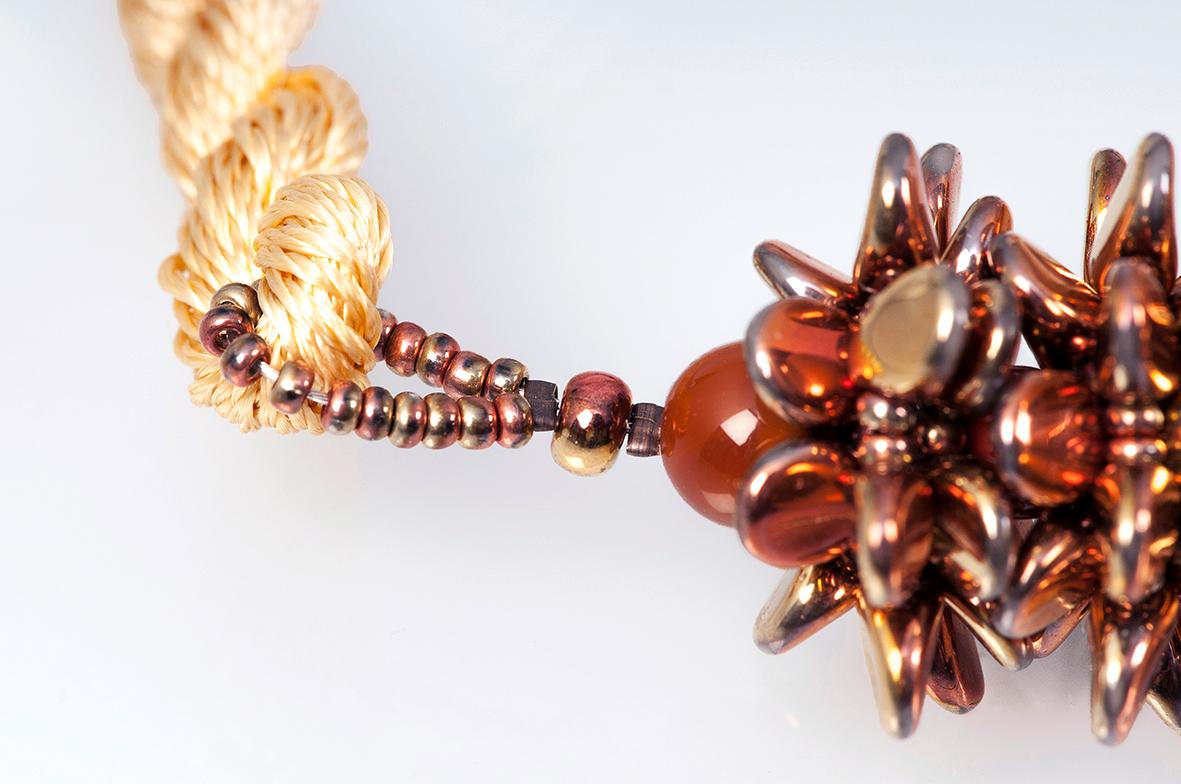 Add a chain or additionally string beads to the wire loops. A hand twisted cord has been used in this example. String the loop on the cord before the final folding and twisting. Sew the ends of the cords in with tailor's thread and sew the eye pin onto it. Only cut any excess threads after you have completed the previous step. Apply a drop of glue. Once it has dried, string a cap and 1x R6 onto the eye pin. Create the loop and attach the fastening to it. 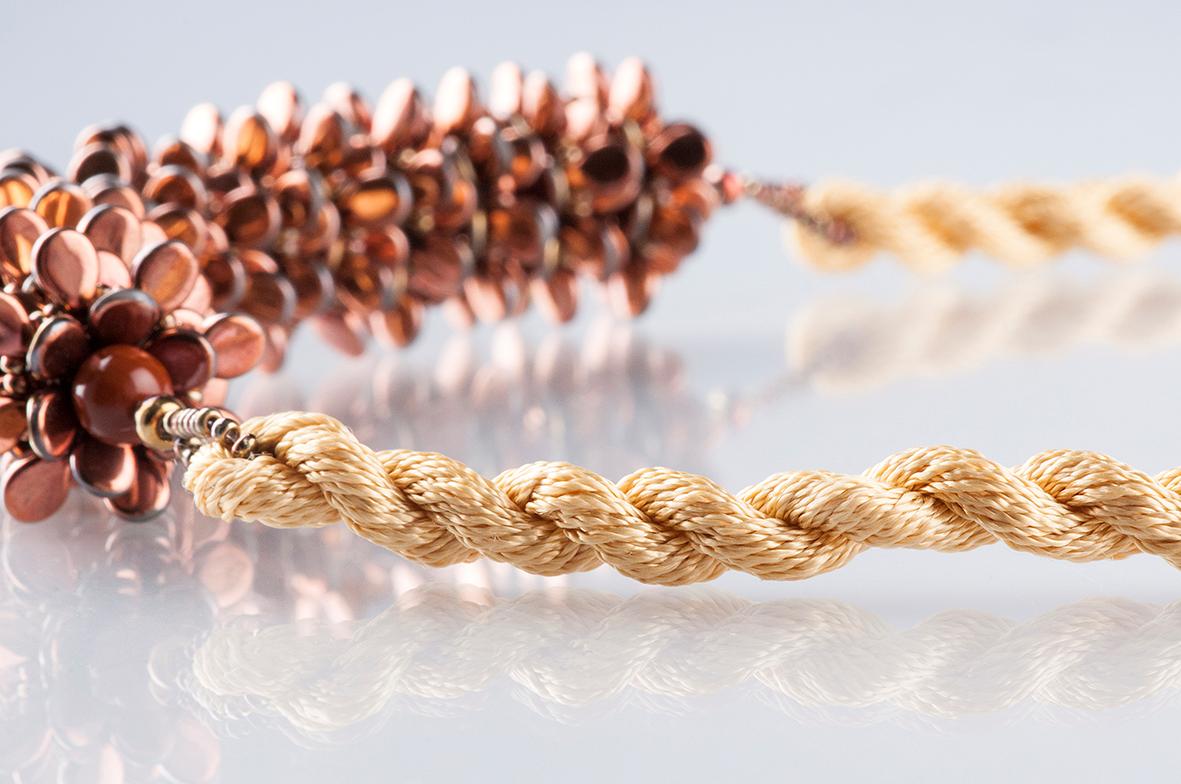 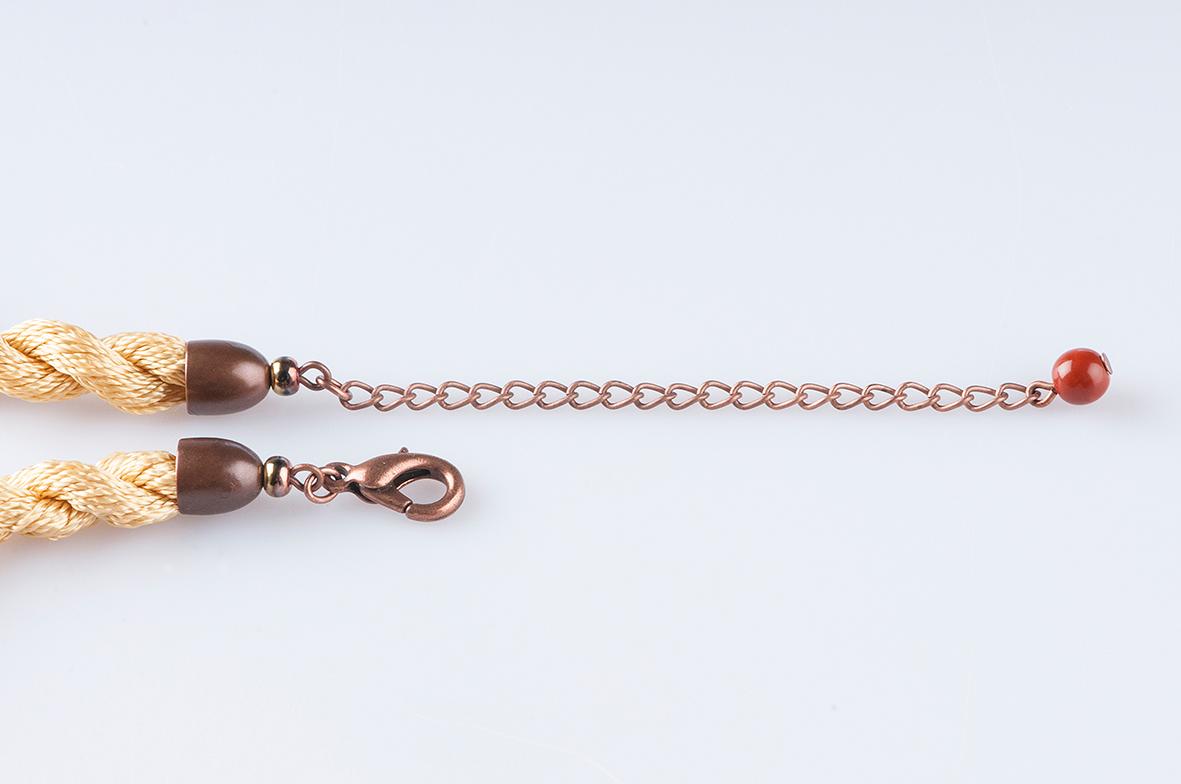 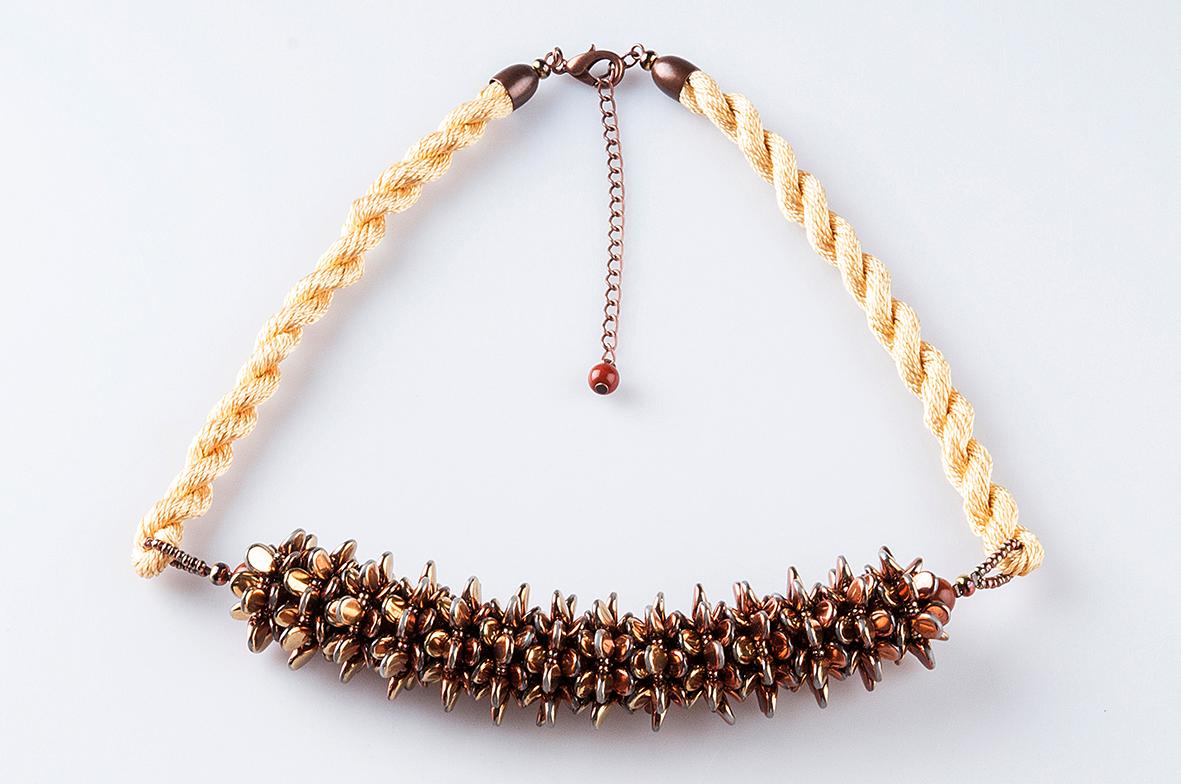 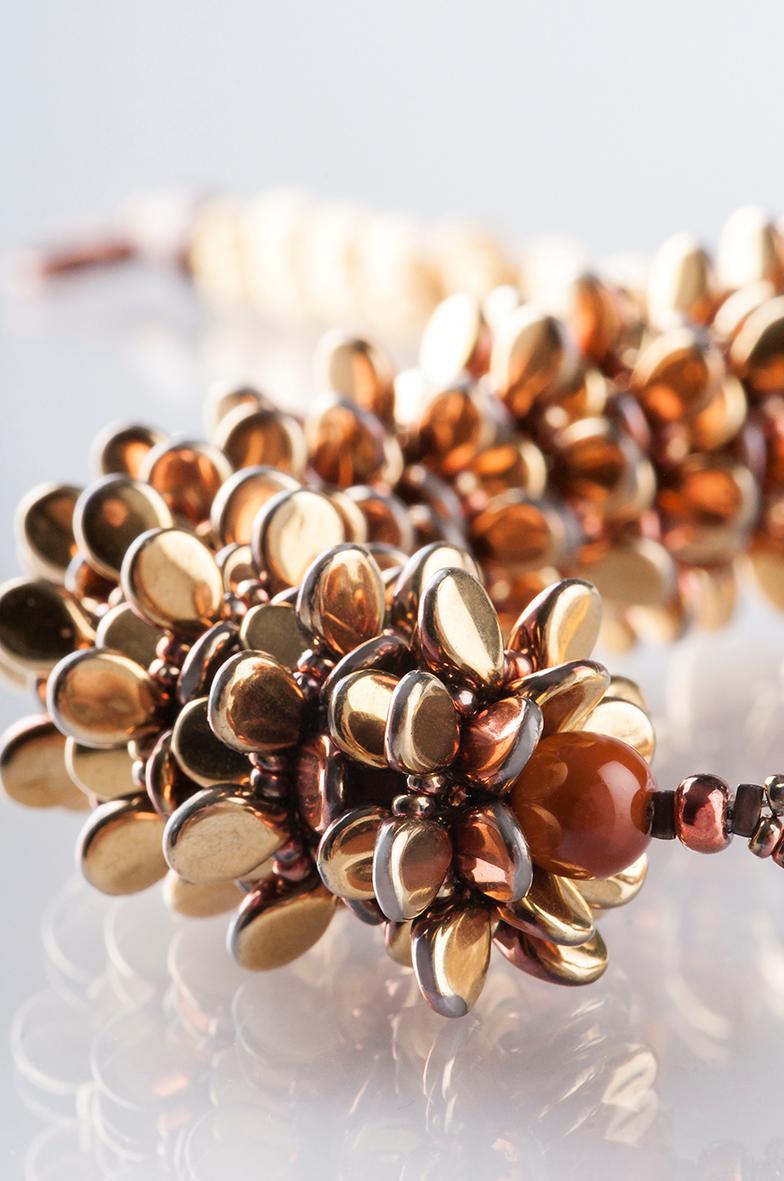 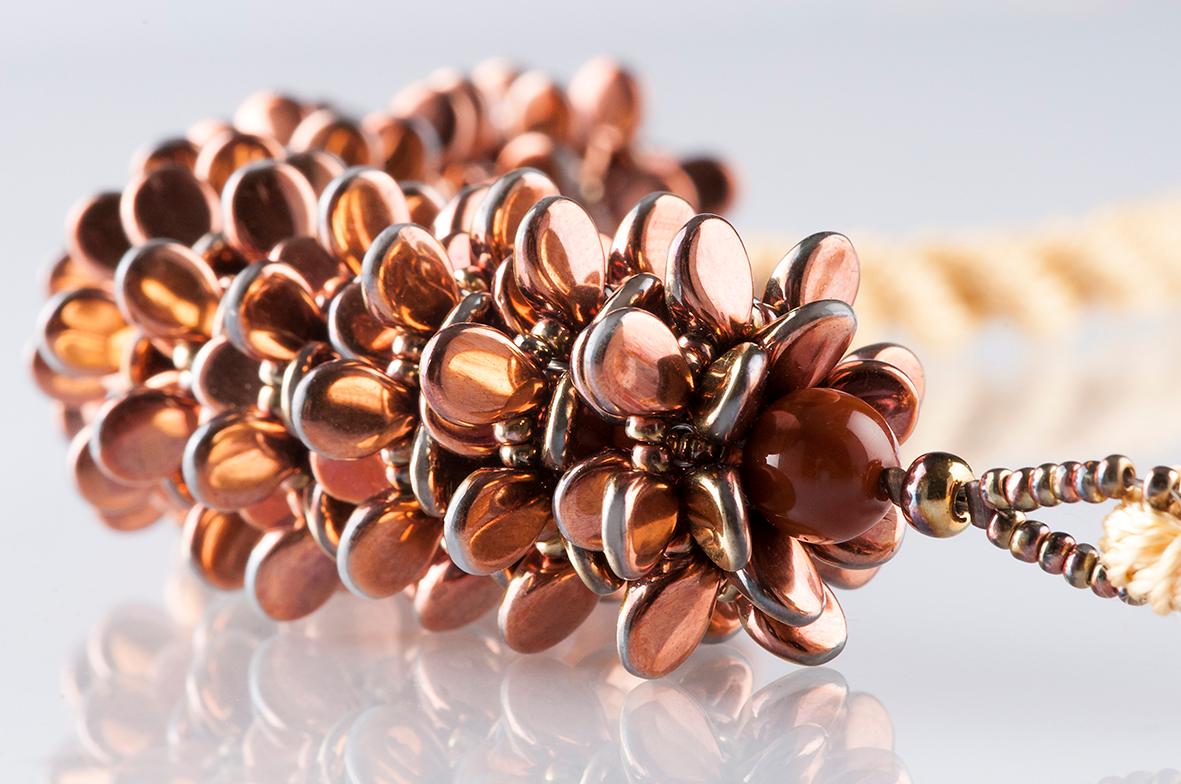