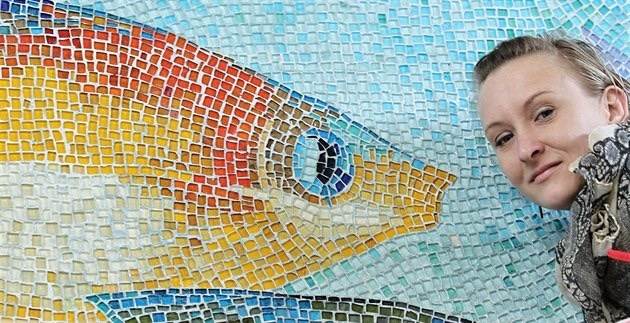 The mosaic in fine art - FROM MONUMENTALITY TO PIXELS

The exhibition accompanies, analyses and provokes ..... after all, the mosaic technique is a provocative art form. We wish to present the mosaic as a union of the beauty of materials and the beauty of the image, which other art forms can never achieve. Come and discover how mosaics can be perceived from a new point of view and with all the senses. Follow the development of the technique from ancient times to the present at the most comprehensive exhibition of mosaics to have ever been opened in this country.

The exhibition's curator, Magdalena Kracík Štorkánová, the "Iron Lady" of Czech mosaics, added that "the mosaic technique emits pixels ... it is unique due to the fact that we can perceive it both in detail and as a monumental whole. I want to show you the strength of mosaics and to mediate a new way of looking at this art form."

Magdalena Kracík Štorkánová has recently been involved in the restoration of mosaics in the baptistery at Saint John's in Florence, she took down the Sun mosaic from the Hotel Praha during extensive demolition work, saved a mosaic from destruction in the Klíše facility in Ústí nad Labem and initiated the unveiling of a mosaic by Sauro Ballardini at the former UTB. She is the founder and chairwoman of the Art and Craft Mosaic association which aims to draw attention to neglected or destroyed mosaics, to protect them and to create new mosaics reflecting the present.

The exhibition's co-curator is Jana Fořt Torňošová, who works at the Central Bohemian Museum as a glass and ceramic restorer. She became acquainted with the mosaic technique when restoring an art nouveau mosaic in Magdalena Kracík Štorkánová's studio as part of her studies at the University of Chemical Technology (VŠCHT) in Prague in 2013. Since then, she has worked with Magdalena Kracík Štorkánová to jointly create the concept for the exhibition which will open in Roztoky after two years of preparation.

Workshops, presentations of the technique and guided tours will take place at the weekends. The workshops will focus on various visitor categories with a wide range of materials. The detailed programme is available at www.muzeum-roztoky.cz.