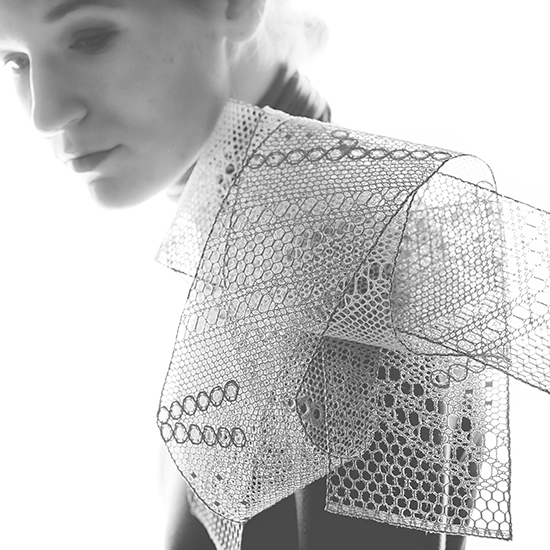 She comes from Desná, from an area of glassmaking and textiles and has been involved in handcrafts since her childhood. She graduated in glass technology in Železný Brod and non-woven textiles and nanomaterials at the Technical University in Liberec, so her studies were in technical fields. She began bobbin lace making at the age of 12, initially under the guidance of her mother and then later under the leadership of Jana Kneysová and Věra Holomečková.

She designs her own lace and she likes to experiment. She favours technique over complicated patterns, possibly due to the influence of the fields which she has studied. When designing and realising work, she regularly uses combinations of various textile techniques. She looks for new ways to use her favourite Alençon lace and to enrich this technique with elements from other types of lace.

Despite the fact that she only makes lace in her spare time and that she devotes a large part of her holidays to it, she has had, as she says, luck in the people she has met and in the opportunities she has had. She also perceives pressure from her environs very positively. The opportunity to lead a lace making course together with her mother has been very important for her, as her students constantly force her to come up with something new. She also cooperates with Preciosa Ornela, where she has learnt to incorporate glass seed beads and other various PRECIOSA Traditional Czech Beads™ products into lace and she has also since started to teach this to her students. She has not only led courses in the Czech Republic, but also in Slovakia.

She has had several exhibitions and she regularly contributes to the Spanish Bolilleras magazine. She has also participated in several competitions where she received the golden pestle in the "Garment and interior lace - design" category for her LADIČKA lace at the 8th Biennale of Czech lace in Vamberk. She has also participated at several events to assist girls with cancer. All of these possibilities have helped to form her relationship with lace and jewelry and mainly led her to create lace with a story.