This travertine set of handmade accessories will accompany you at evening events where glistening jewelry is not required.

Make an enchanting set of fashion accessories to go with a small evening gown. We present a simple tutorial on how to make a necklace and earrings using beads with a surface finish recalling the calcareous mineral, travertine. Be inspired by the range of sizes, shapes and color variants offered by the beads and seed beads from the PRECIOSA Traditional Czech Beads brand and create an original piece of jewelry which will help you shine!

PRECIOSA ORNELA wishes you much enjoyment and many ideas when working with beads and seed beads from the PRECIOSA Traditional Czech Beads brand.

Link the beads which you will later hang on the central sewn section. String the beads on eye pins and use the needle nose pliers to create a loop on the eye pins. Grasp the end of the eye pin, twist around the point and straighten the loop. Prepare two rings or ovals next to the loop. Slightly open the ring, thread it on the loop and close it. Attach the second ring to the ring (fig. no. 1a, 1b, 1c). Create five pendants (dark 4x FPB14, 1x PB16, light 2x PB12, 3x PB14). 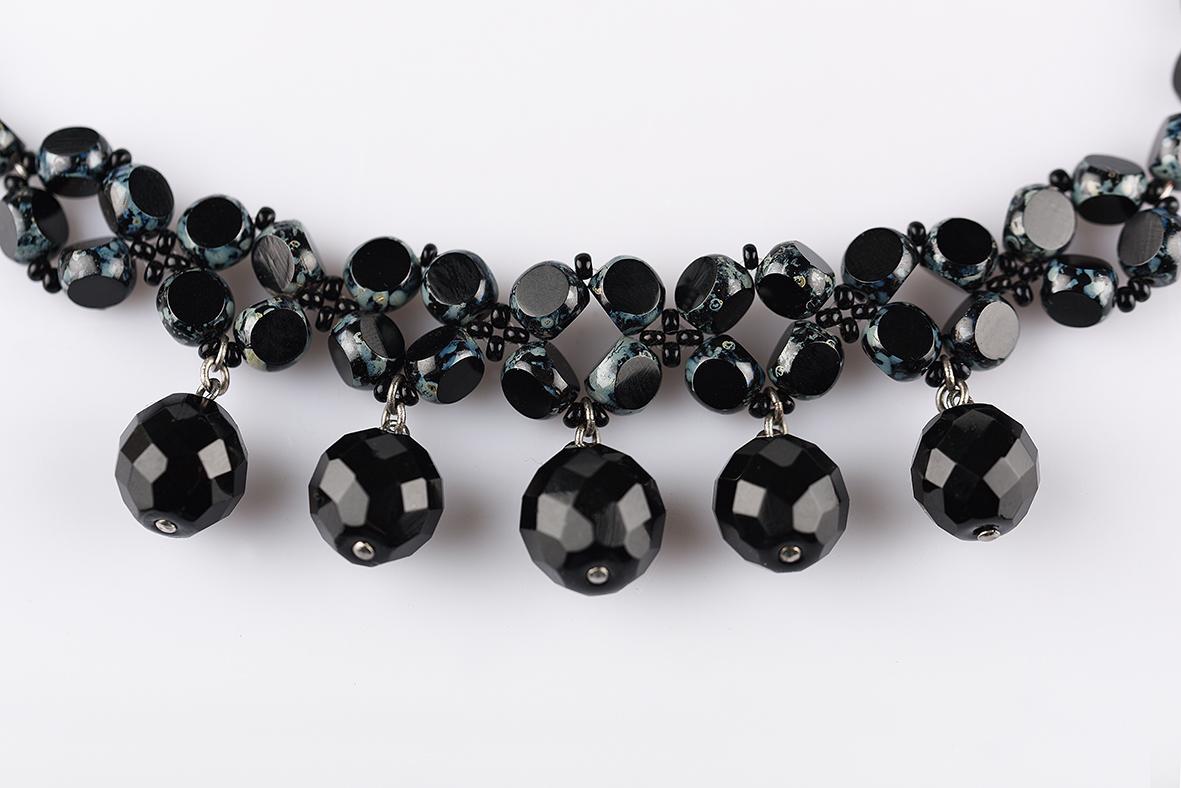 Tie the line off with two knots. Tighten the central band. Pass the line through it one more time in the direction of the basic stringing and the added beads. Once again tie off the ends of the lines and pull them into the surrounding rocailles and beads and cut them off (fig. no. 4). 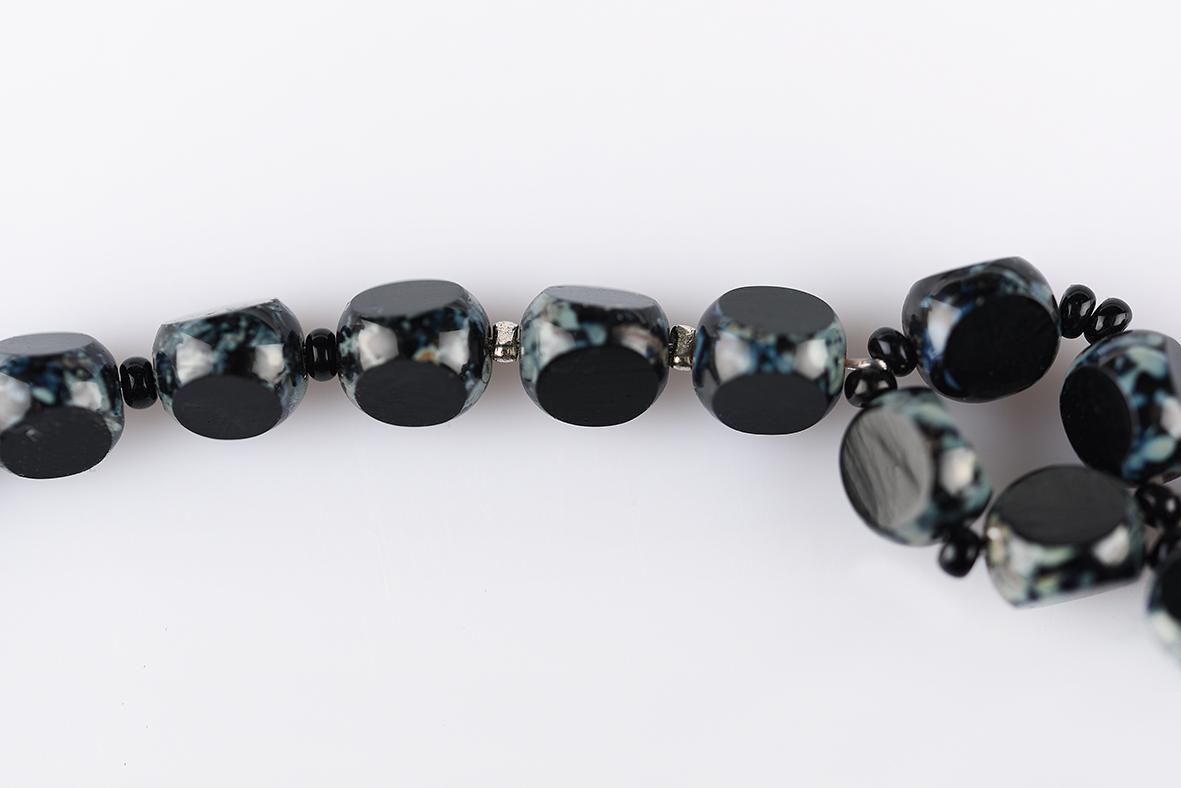 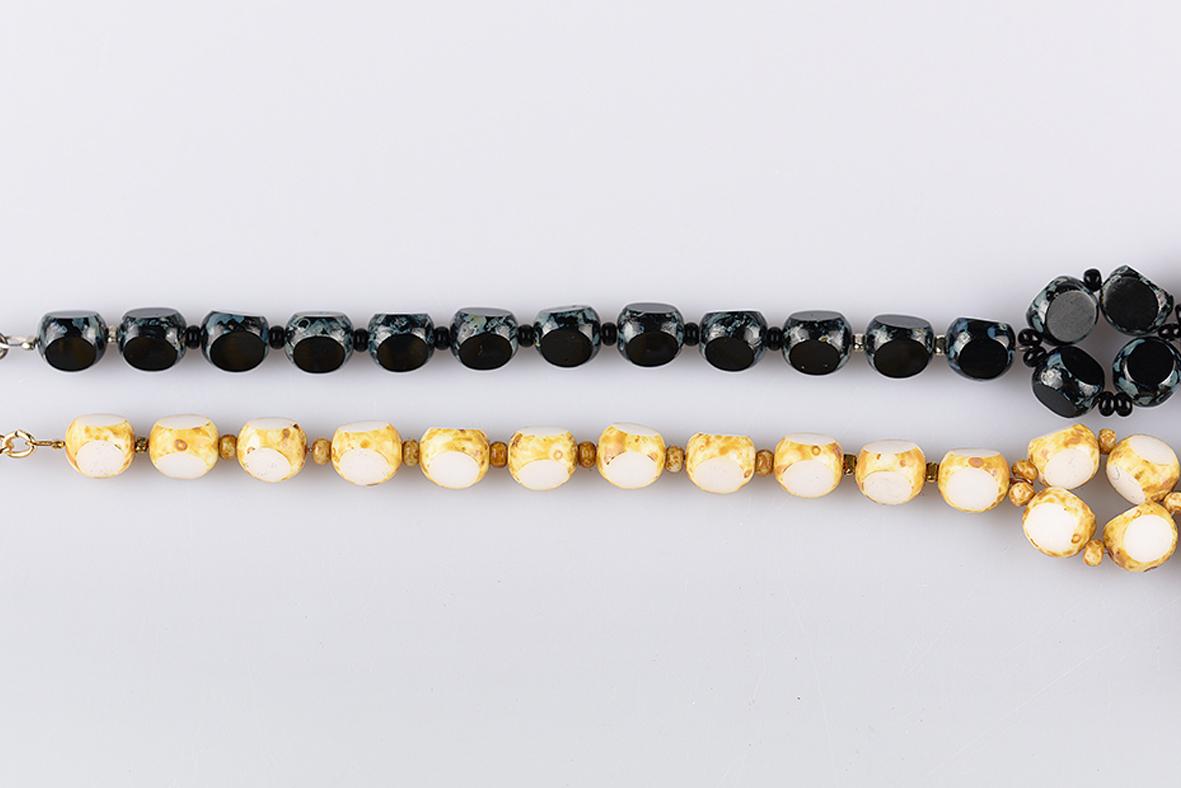 Return the wire to the bead, the metal crimp beads and a few of the previous rocailles and beads. Create an end loop from the wire (fig. no. 7). 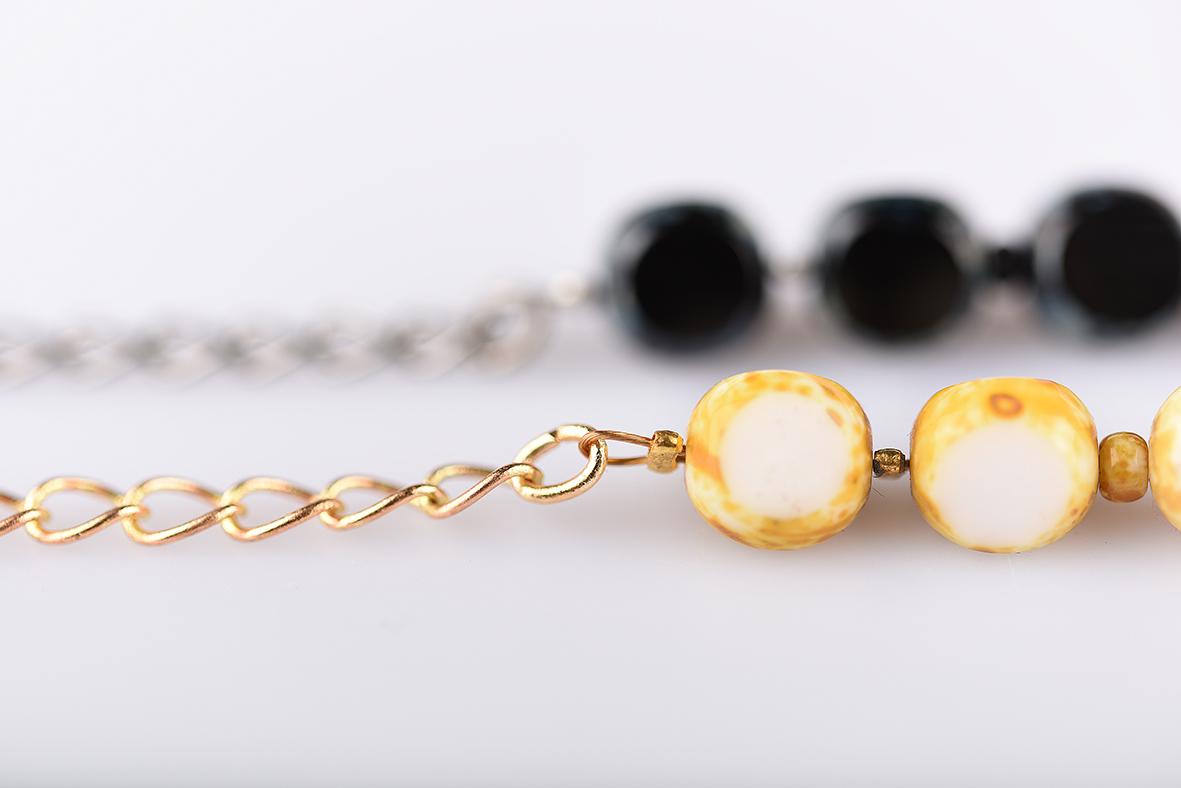 Crimp the metal crimp beads and cut off the end of the wire. Attach the fastening to the wire loop using the rings or ovals. Attach a carabiner on one side and the adjusting chain with a linked FPB8 at the end on the other side (fig. no. 8, 9).

First link two pendants which are just like those in the sewn centre for the necklace. Connect two rings or ovals to hang them on the hook. 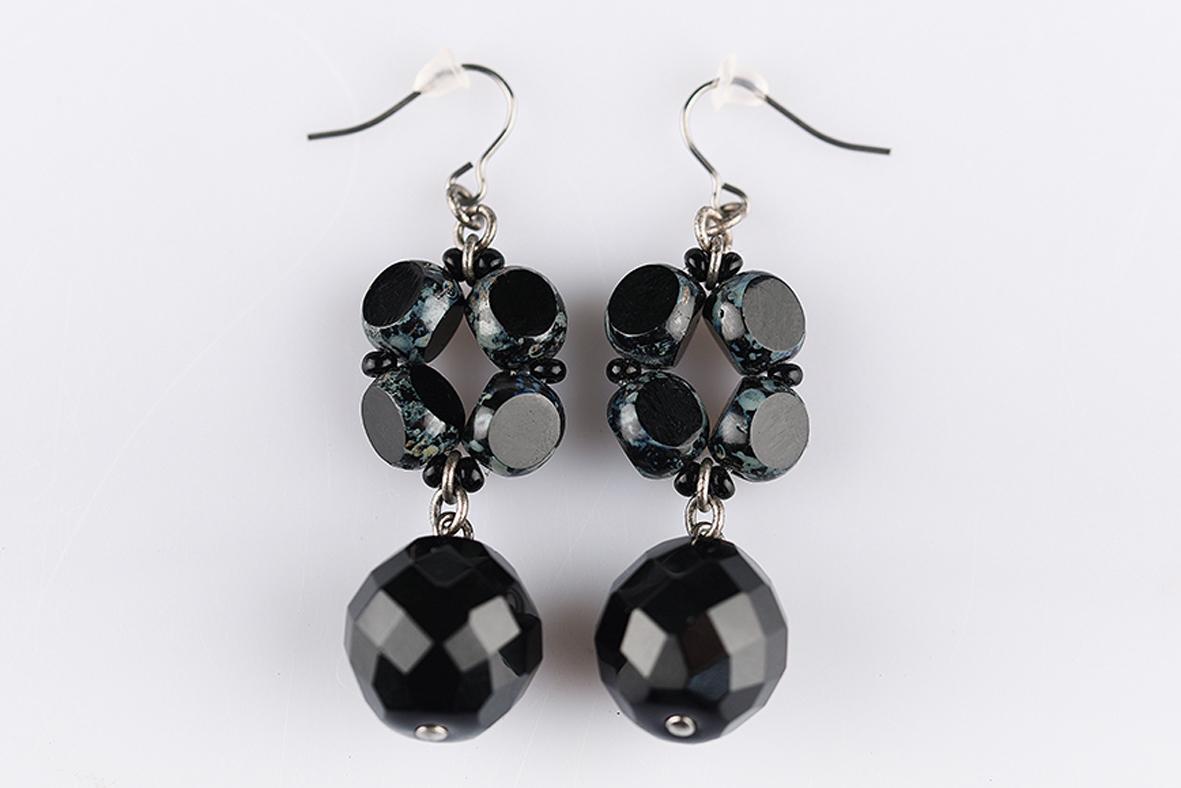 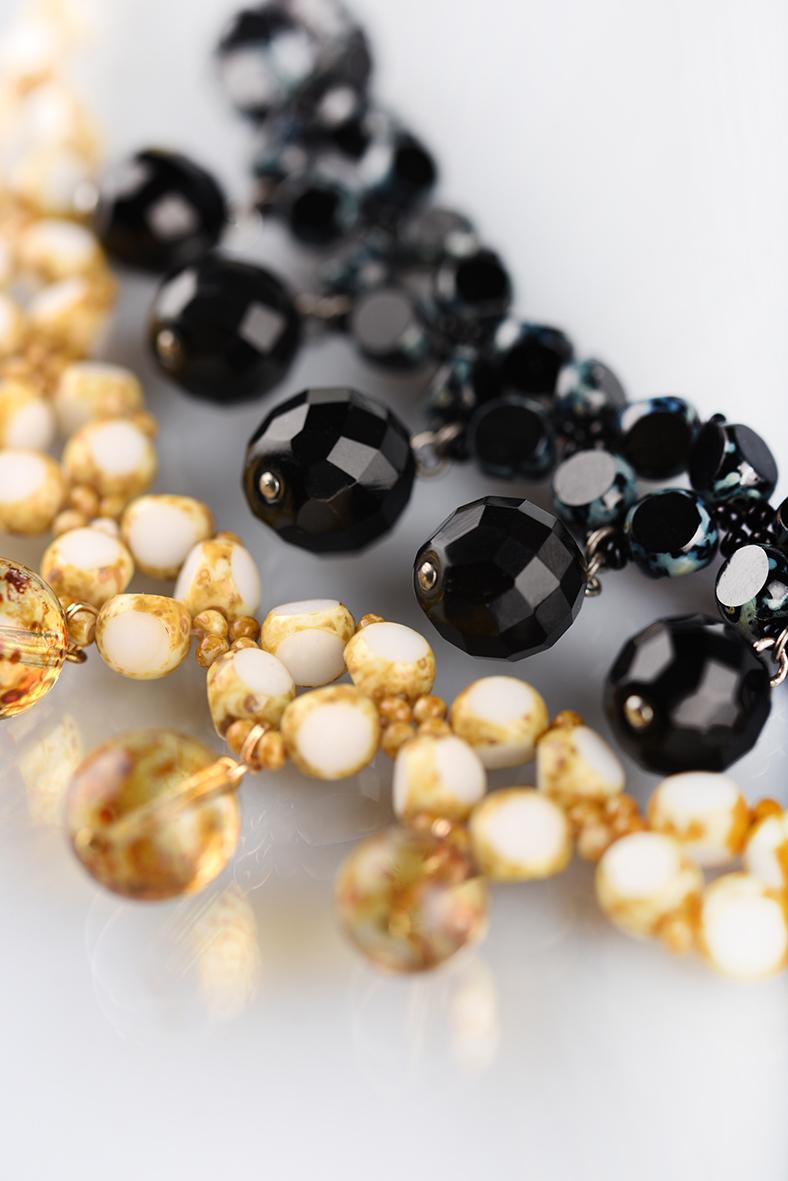